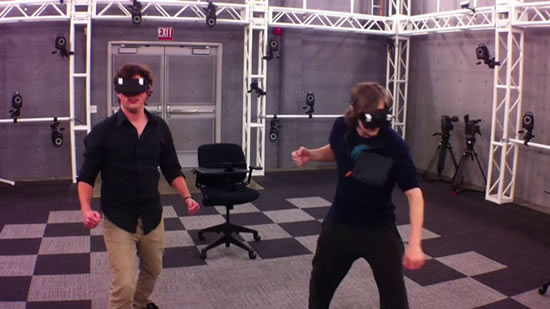 For the Star Trek fan in you, researchers at the University of Southern California are working on a project to create full-body 360 degree virtual reality gaming system to simulate the holodeck form Star Trek. Dubbed Project Holodeck, this new system will immerse the players in a never before experienced virtual reality experience where a gamer will play in a large digital space operating actually from a small space. The Project will use Oculus Rift head-mounted display with 105 degree 3D view for visual feedback and a PlayStation Move sensor to track a player’s head movement in real world. While Razer Hydra Sixense motion controller for six-axis tracking will be used to track hand and body movements to engross the player into the game.


The Project Holodeck that could be embedded with haptic feedback, to let the player experience the gushing winds and other in-game movements to simulate a real-like experience, is only a prototype for now. There is no word on when Project Holodeck could be a real product but we learn that the team at the University is in talks with gaming companies to make it a real product soon.