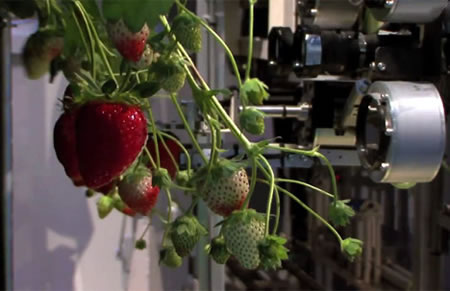 The Japanese are never short on new inventions to make like easier. With the younger generation moving away from the agriculture sector, this new innovation has clearly set new standards in the Japanese farms. We’ve all seen strawberry-picking robots before and the now Japanese have improved on that, with a model developed by Japan’s National Agricultural and Food Research Organization. Introducing a robot that is not only capable of plucking individual strawberries from the vine but is also smart enough to detect the color of a perfectly ripe strawberry and only pluck only those.
Check out a video of it in action after the jump.

With the help of a pair of cameras, these robots can detect the precise position of each berry in three dimensions and pick berries that are at least 80 per cent red. This robot can also be modified to handle other sorts of fruits and vegetables and is currently being field-tested by farmers to see if it can be more efficient at the job than humans. It has a record job rate of one berry every 9 seconds and it could help reduce harvesting times by about 40 per cent.
[Ubergizmo]