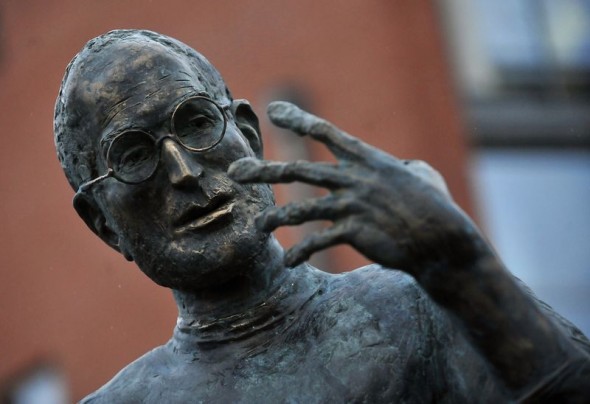 Steve Jobs has always had iconic status,but the fan boys of the man have taken that to a whole new level. A new crowdfunding campaign has begun to raise funds for an over the top tribute to one of the greatest minds of the computer age in the form of statute that could very well put the Statute of Liberty in second place if they overshoot their goal of raising $50,000 on Indiegogo. Should the amount exceed that mark, the statute could very well go over the 150 foot tall mark. If you thought Steve Jobs was a larger than life personality, these guys aim to make it a reality.


An unknown group calling themselves the “bearers of his legacy”, are the people behind this project. The only information about them is that their based out of San Francisco and they claim to be no more than a group of fans (naturally) and ‘young entrepreneurs. In a statement they said – “The memory of Steve Jobs is a source of inspiration. His humble origins, personal imperfections and the turbulence of his career make his story relatable; his prolific, world-changing career make his story admirable. Steve Jobs had flaws and was knocked down in his career. He responded by rising to even greater heights: developing life-changing, genre-defining products, revolutionizing industries, and creating billions of dollars of economic value. Steve Jobs put the emphasis on innovation and creating what has never been created.

“The memory of Steve Jobs is of someone for whom we relate to his lows and can aspire to reach the heights he attained. Steve Jobs once said he wanted to “leave a dent in the universe. He lived up to that and had an immense impact during his lifetime.”

That’s quite a tribute in itself and does showcase how deadly serious this group is about the project. For a sum of $200 towards the project, one would get a black turtleneck sweater that’s become synonymous with Job’s personality and panache, his trademarked outfit. That and any old pair of blue jeans, a shaved head and glasses and you could walk around feeling inspired I imagine. With a donation of $666, the price of the Apple 1 computer, one could even be able to give inputs to the design and construction of the ‘masterpiece’. And furthermore for $1995, you could get yourself invited to a VIP unveiling of the statue.

The group was inspired by the bronze statue of the icon that sits in Budapest and they aim to make their monument obviously better and possibly a whole lot bigger. The site hasn’t been selected yet but is directed towards the Bay Area. Should it ever come to pass the $50,000 mark Lady Liberty might have to deal with some competition.