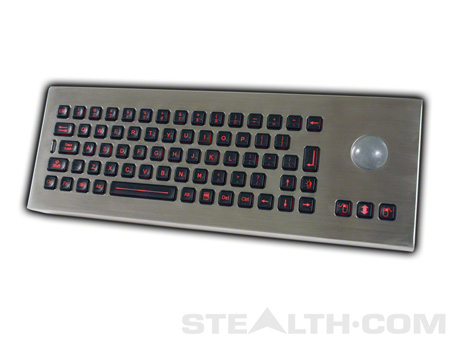 Stealth have released the KXBX-400 series keyboard that will incorporate an in-built trackball mouse (that’s environmentally lives up to NEMA 4, 4X, IP65 specifications) that has a brilliant resolution of 800dpi, a vandal-resistant enclosure that will also make it resistant to harsh, wet and dry environments, 71 full travel keys with silent tactile feedback, NVIS-compliant red adjustable backlighting, 10 million actuations expected lifespan and a 5.75’ USB cable. It surely matches up to be a super-hero or a juggernaut among keyboards.

This one may well find its way to transport and military applications with all the ruggedness and speed that it adapts. $695. What’d you expect?
Source