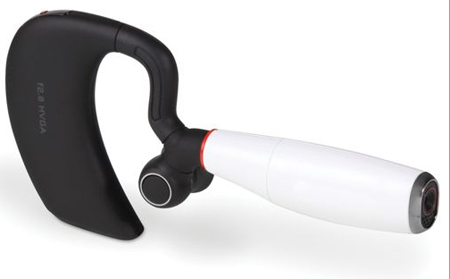 Who suspects people with Bluetooth earpieces anyway? May be when the technology was new there was quite a bot of suspicion that would arise in the minds of those who noticed people wearing these. Now, however we aren’t going to have much happening on this front besides an odd release now or then. And then we’re bowled over with this ingenious marvel. The Bluetooth Headset Camcorder does well to fool people around you, who have come to terms with that thing on your ear, to actually be a camcorder. Your corporate espionage story will be told in video at 30 fps and 480p. Videos that are shot can be transmitted to a smartphone in MP4 format.

You can post these videos to Facebook or YouTube with the press of a button. All it costs to be the sly one is just $200.
Hammacher