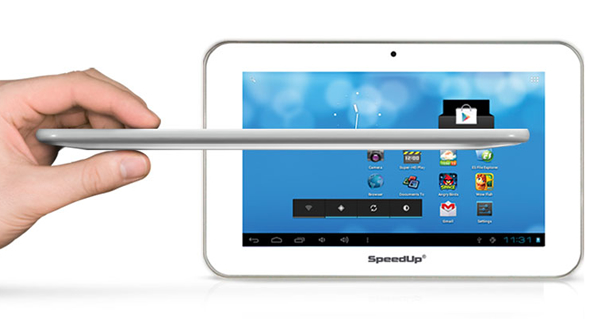 Samsung and Apple are expected to hold on to the edges of their seats and sit up straight, with the announcement of the 7.85-inch SpeedUp Pad, the soon-to-release super-slim and lightweight tablet. Crafted by SpeedUp technologies, this upcoming tablet is considered to be the thinnest and lightest of its type and will be shown-off at the COMPUTEX 2013. Nestled inside this tablet is a 1.2GHz Qualcomm quad-code Snapdragon MSM8225Q processor, 1 GB RAM and 8 GB storage. With 3G wireless standard support, HSPA 7.2 Mbps or EVDO Rev A, this tablet downloads stuff off the internet quickly.


Keeping shutterbugs smiling, the SpeedUp Pad also sports a 5 MP rear and 2 MP front cameras. To power it all, the tablet comes with a 4000 mAh battery that kicks away the phenomena of looking for power outlets all the time. The tablet runs on Android Jelly Bean (4.2.1) and boasts a thickness of just 7.9 mm (0.31”), weighing in at 300g (0.6lbs). The 7.85” IPS display screen sports a high definition resolution of 1024×768, allowing you to meet the eyes of your iPad-owning buddies. This one could come with a price tag of $249 a pop.