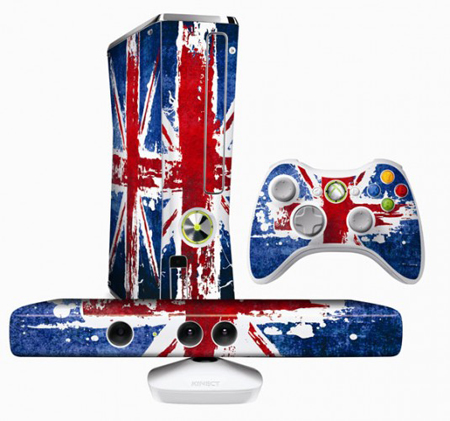 Clothe just about anything in the colors of the Union Jack and it’s bound to turn out looking spectacular. Guitars, Mini Coopers, sneakers and just about every darned thing have had its share of the Union Jack. This time around, Microsoft decided to give the Xbox 360 a Brit touch and has unveiled the Xbox 360 Celebration Pack to celebrate the spirit of Britain and of course, the upcoming London Summer Olympics.
Officially christened the Xbox 360 Special Edition 4 GB Kinect Celebration Pack, this one comes with three months of free Xbox Live Gold and a special-edition Wireless Mobile Mouse 3500 in colors of the Union Jack besides the controller and the Kinect. While the mouse alone is priced at £29.99, this special edition Xbox 360 will cost £249.99.