Gundam anime fans who spend the better half of their lives with their eyes rooted to Nintendo screens, while spending the remaining half watching the series have something terribly delicious to look forward too, with the SD Gundam G Generations 3D game being made available on a limited edition red Nintendo 3DS, scheduled to hit store shelves on the 22nd of December. Called the Char Senryō Nintendo 3DS, this limited edition 3DS pays homage to the Gundam franchise with a red finish, series character Char Aznable’s golden Zeon insignia and black silhouettes of the The Red Comet. And to top it all, a quote runs along the outer finish that pompously states “In war, to keep the upper hand, you have to think two or three moves ahead of the enemy.” Priced at 21,090 yen ($270.85), the box comes with the limited edition 3DS, two limited edition cards and SD Gundam G Generations 3D for the 3DS. 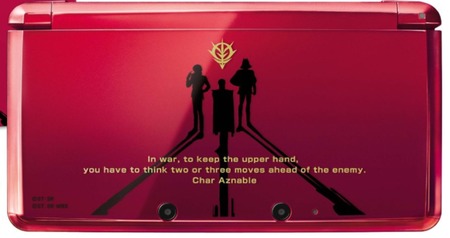