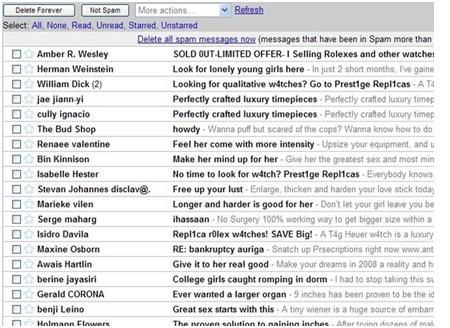 Spam usually manages to make a sale after 12.5 million emails and is yet profitable

Buy your prescription drugs over the Internet and save hundreds! Guys: drive your women crazy with a guaranteed enlargement process! Those are just a few of the typical come-ons we’ve all seen in our inboxes over the last few years, the growing scourge known as spam. Your email filters get rid of a lot of them, of course, putting them right where they belong – into the trash. Most of us feel the same way about the odious unwanted messages. However, if almost everyone deletes them, did you ever wonder how the spammers make any money and why the flood continues non-stop? It takes 12.5 million spam emails to get one response, according to a month-long study where Californian researchers pretended to be spammers. The researchers from the University of California campuses at Berkley and San Diego took control of some 75,000 machines via the Storm botnet earlier this year, before it was effectively dismantled. They also set up their own fake pharmaceutical web site to direct people to, in order to see how much money spamming networks actually make – and how many people really click links in emails offering cheap drugs and anatomical enhancements.

The group sent 350 million messages over 26 days, garnering just 28 sales for a conversion rate of under 0.00001 per cent. Only 28 people actually took advantage of their “offer” in 26 days, ‘sending’ in an average of $100 each. Nevertheless, despite the low return, they still earned a profit.
Via