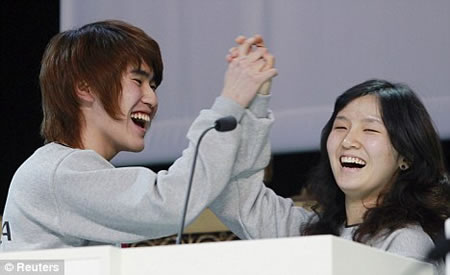 South Koreans are the fastest texters in the world

Were you even remotely aware of the ‘LG Mobile World Cup World Championship’ that was held in New York? Well, now you are. It happens that in a competition held there a South Korean duo of students managed to make it to the top spot, thus winning the accolade of being the fastest texters in the world. There were a total of 13 nations that battled out this competition. All were subject to typing on the LG BL20 and the LG GW520 phones. The former has a number pad while the latter has a QWERTY keypad.

The winners happen to be one Yeong-Ho Bae, 18, and Mok-Min Ha, 17. Bae was quoted saying “Every moment of every round was incredibly intense.”. He added, “I’m thankful for this win but also for the opportunity to meet new friends from different countries in one of the most exciting cities in the world.”
[PRNewswire]