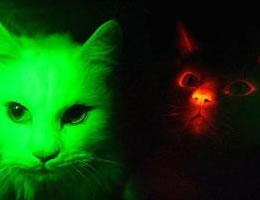 In a bizarre attempt to create something unique South Korean scientists have done some fooling-around with the fluorescence protein genes and have bred white Turkish Angora cats to glow red under ultraviolet light. The pair of cats have been cloned from their mothers’ altered skin cell and are nearly a year old. The scientists work could help unravel mysteries of some 250 genetic diseases suffered by both humans and cats. This research could also help in cloning endangered tigers, leopards, and other animals. Without getting into the ethics of genetic cloning, this cat experiment took place at Gyeongsang National University with funding from the Korean government.