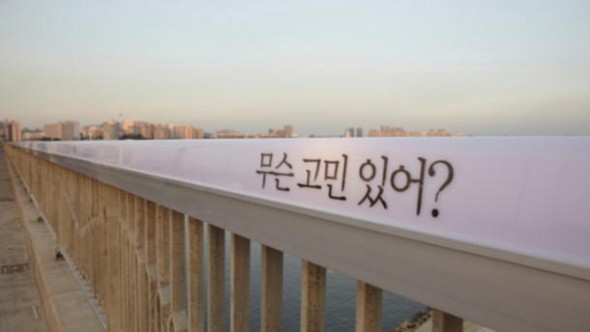 Besides producing some fantastic pieces of technology and design, South Korea is also well known for its high suicide-rate, something the country isn’t too keen on showing-off. As per reports that have been meticulously drawn out in the past, South Korea has the highest suicide rate from all the countries in the Organisation for Economic Co-operation and Development, about 28.4 per 100,000 people per year to be accurate. As expected, jumpers prefer a few spots in the city to make their final leaps, one of which is the notorious Mapo Bridge, over the Hans River. Nicknamed the Bridge of Death, this structure has seen several suicides in the past and the Seoul City government came up with a plan to prevent these, with help from Samsung Life Insurance!


The handrails of the bride sport motion sensors that detect a jumper by sensing a person’s movement. Once a suicidal individual is sensed, short inspirational messages specially made by psychologists and suicide prevention specialists light up on the handrails. These are further enhanced with pictures of families and individuals. The effort seems plausible and could indeed keep quite a few people from committing deadly mistakes on the Mapo Bridge.