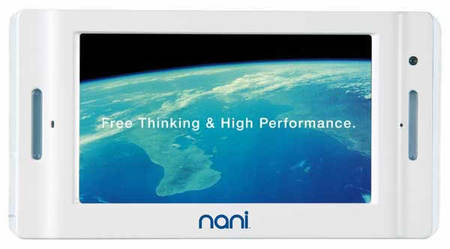 Come July 18th and Wireless Japan 2007 will kick off where the Sophia Nani will be unveiled. The phone is a true iPhone killer it sports a super large 4.3 inch touchscreen TFT with a resolution of 800 x 400 pixels. It is powered by a RMI Alchemy Au1250 processor at 600 Mhz and runs on Windows CE. It supports Wi-Fi 802.11b/g and thanks to Windows Media 10 can playback a variety of audio and video files. Like the iPhone it has no buttons and has to be operated using the touch screen only. The Nani has dual camera a VGA in the front and SVGA at the back. It does pack in a full fledged digital tuner so you can watch crystal clear TV on the move and even program the phone to record your favorite programs. Unfortunately like the iPhone it does not have 4 / 8GB of flash memory but only a Micro SD card slot and USB.

Pricing and availability of the Sophia Nani is not known, however it can only be used as a PMP outside Japan.