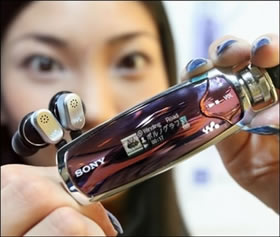 Sony has confirmed the juicy rumors by sticking the official stamp and unleashing the NW-S600 and NW-S700 series. Their new Walkman S series of digital audio players are chic and sleek and deliver what we could expect. On the spec sheet we have loads of mingling figures—4/2/1GB of flash memory, 3-line OLED display capable of dishin’ albumn art, FM tuner, playback for MP3/ATRAC/ATRAC Advanced Lossless/Linear PCM and AAC/WMA sans DRM files, and the ability to record from external audio sources direct to PCM or ATRAC3Plus. The player features a quick 3-minute charge for 3-hours of playback or a 2-hour full-charge for up to 50-hours playback of all those 132kbps ATRAC files you probably don’t have.

Sony just couldn’t refrain himself from claiming that the NW-S700 series delivers the highest sound quality in Walkman history due to the integrated noise cancellation and bundled 13.5mmEX earbuds with integrated in-line Mic. the NW-S600 players is also offered in 2/1GB flavors, but lacks FM tuner and built-in noise cancellation. The NW-S700 players will reach the retail helves on October 21st in Japan. Rainbow lovers will have the color options of black, violet, gold, and pink while the NW-S600 DAPs are set to roll on November 18th in black, blue and pink.