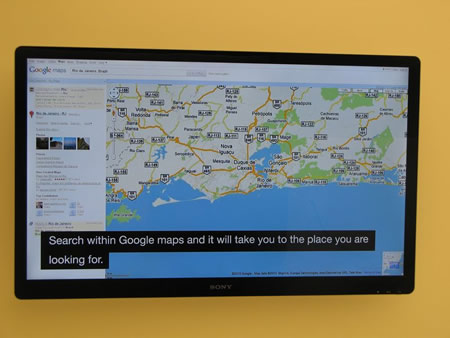 Sony shows off prototype of Google TV at IFA 2010, expect it this fall

A few of the more expected technologies are showing up all over IFA 2010 and here’s one more – Sony’s been going on about their Google TV for quite a few months now and Berlin was the place they showed it off. It may have been just a prototype but who cares. This new LCD TV that’s going to run on the upcoming Google TV platform will feature Chrome Web browser and Adobe Systems Flash 10.1. Just like you’d find on your Android phone, this new 40-inch LCD HDTV (1080p) will also come with a Quick Search Box for scouring the net for videos and other stuff you’re might be looking for. The platform also allows for a translucent Web browser on the upper part of a screen to be showing a TV program as well as to juxtapose the browser and a TV program. The unfortunate part is that the TV wasn’t actually functioning but just showing images of what the UI would look like when done. The good news is it’s probably going to be out this fall in the US first.
Techon