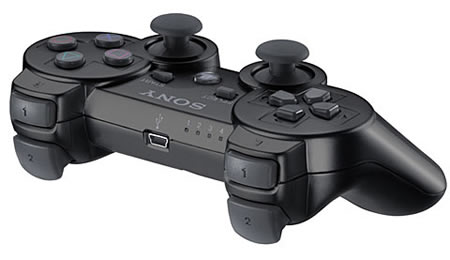 Sony has trashed the boomerang controller and opted for a controller similar to the PS2’s dualshock controller. However it does not rumble is lightweight and works via Bluetooth. SCE has incorporated motion technology so you shake it around to play similar to the one on Nintendo Wii (Revolution). The wireless controller charges via USB and you can play wired also via USB. The top trigger L2/R2 buttons have been enlarged slightly for better control and more analog sensitivity. The analog sticks have also been broadened for better control, with a technical boost from 8-bit sensitivity to 10-bit sensitivity. Sony demonstrated it’s tilt technology by Warhawk the only game on display that currently makes use of the technology.
Update – Sony has not stolen the idea from Nintendo but from Microsoft and Logitech says Bob from Gamespot. As gyroscopic, motion sensing controllers were made by Logitech and Microsoft since 1999.
(Video after the jump)

Sony has not announced pricing for an additional PS3 controller.