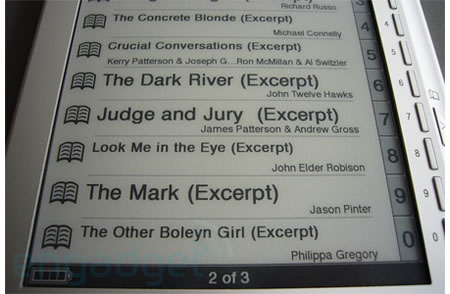 Engadget had the opportunity to question Russ Wilcox, CEO of E Ink, to give some lowdown on Sony’s E Ink-based Reader PRS-505. Russ gave some info on the benefits of the 505’s new display chemistry, called E Ink Vizplex:
According to E Ink, this Vizplex chemistry is ~20% brighter than the 500. “You can see it best on the black and white menus compared to the old 500 which are twice as fast.”
· Page turns are only a little faster, though; Sony said something like ~20% (but our unit seems like it might be even faster than that). Because…
· When out of the menus and in text-reading mode, most of the new E Ink chemistry’s horsepower goes into the reduction of ghosting (a bit of a problem on the 500) and the 8 grayscale levels (doubled over the 500’s 4 levels).

· Contrast is also ~20% improved. “The contrast level is better than a newspaper, on par with a book, and a bit below a magazine.”
Source