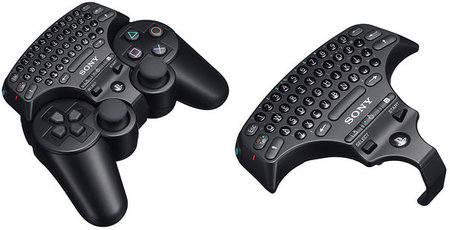 At the Leipzig Games Convention Sony announced the Wireless Keypad for its PS3. The device latches onto either a Sixaxis or DualShock 3 controller. With it gamers will be able to send messages to friends via the PlayStation Network. Apparently the Wireless Keypad features a mode changes the surface to a touch pad for use when navigating a Web page. Specs read Bluetooth capabilities as well. There are two shortcut buttons on the pad that make it easy to roll over to the messaging features on the PlayStation 3. a November release is expected, however little else is known right now.
Source