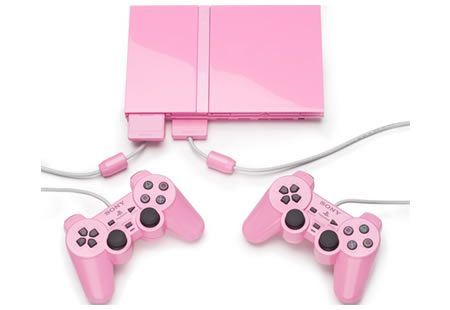 Sony Computer Entertainment Europe announced the latest member of the PlayStation family aimed at the fairer sex on Monday- a limited-edition of slim line PlayStation 2 in pink. The Pink PlayStation 2 is funky, fresh, and fashionable, and will further broaden the console’s continuing popularity and relevance with a fun new twist. The console will come with two matching pink analogue controllers, and a pink 8MB memory card. Inside it’s no different to the standard console, but that lush pink casing means it’s a whole lot more eye-catching than your average set-top box. Scheduled to hit store shelves on November 8, it will only be available from retail outlets in Europe.

But you can catch a glimpse of the new console at the Games Convention in Leipzig, Germany, later this week. Joining the PS2 players club with this pink version will set you back by additional $245.
Via – Gizmodiva