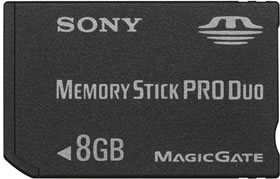 Sony Japan has announced the ‘MSX-M8GS’ Memory Stick Pro Duo with capacity of 8GB. Before you make plans of using it with your camera get this, the 8GB Memory Stick will be compatible with Cybershot and Vaio laptops sold in 2007. PSP’s running firmware ver 2.81 will be compatible with the Memory stick. 8GB does put a lot of free space for disposal as you can load up 19 hours 20 minutes of QVGA video in MPEG-4 format at 768 kbps, 2500 JPEG images and 4100 songs in Atrac format at 64kbps.