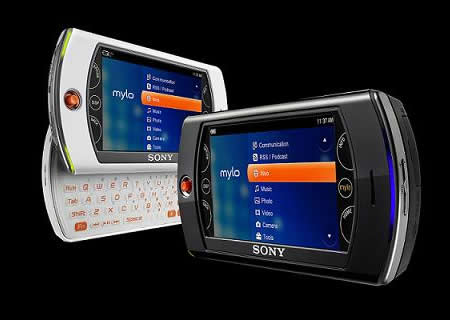 It looks like this year its raining slider keyboard devices, Sony’s new Mylo supports popular web entertainment applications for a PC, in a pocket able broadband device. Available in black or white, with a back-lit, slide-out QWERTY keyboard, this device connects to open Wi-Fi networks using 802.11b/g standards. With Adobe Flash Lite 3 software, the Mylo communicator gives you access to YouTube and other popular Flash-based web sites. The device can also upload and download content using the touch screen interface on its 3.5-inch display. The Mylo also comes with a 1.3-megapixel camera, instant messaging applications, Skype and a Facebook notifier keeps track of specific elements of your Facebook page.
(Videos of the Mylo in action after the jump)

The new communicator comes with 1GB of internal memory, with the option of adding up to 8GB of addition storage with Memory Stick Duo media. The device supports Windows Media DRM 10, and also plays MP3, AAC and WMA files. The Mylo communicator offers up to 20 hours of music playback, six hours of Skype talk time and up to seven hours of video playback. It comes equipped with a microphone, stereo headphones, USB cable, a stylus and a neoprene case. The latest Mylo communicator will be available in January for about $300.