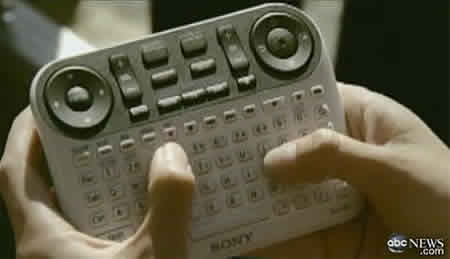 Just a little while ago, in September, Sony finally showcased their prototype of Google TV at IFA 2010. While the system was not actually in working condition but merely a demo playing the various functions, it nevertheless seemed quite impressive. The Bravia GT1 television is the television in question and coupled with Logitech’s Revue set-top box, this pair will bring Google to the big screen, so to speak. That’s not the last we’ve got on the Google TV front though. The Controller for Sony’s Google TV has made it out a little earlier than it was supposed to. NBC Nightline had the controller on hand. It’s a large looking device that looks like a part remote control part QWERTY keypad. With navigation pads, standard buttons for volume, channels etc. it looks neatly designed but, honestly I did expect something a little more impressive.
Electronista