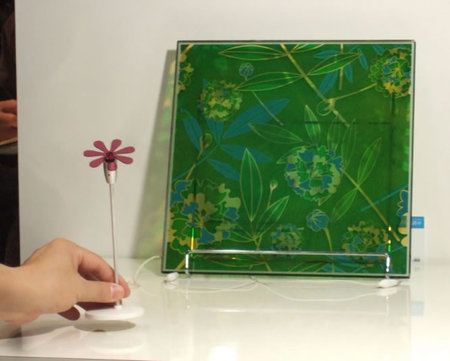 More power to Sony as the company launched its beautifully designed Flower Window, a dye-sensitized solar cell (DSSC) which converts light into electrical energy. Called Hana Mado, the flower window was exhibited at the Eco Products 2010 exhibition in Tokyo, bringing a new meaning to the phrase “flower power”. Sony attached a small fan to the device to show how it continuously generates power. When the light is blocked, the fan stops spinning. Hana Mado is exciting for a number of reasons, not the least of which is that the technology costs less than other solar tech, and is easy to install in already existing buildings.

The smart design is very aesthetically pleasing too, using screen printing to generate custom designs according to the consumer’s preference. While its not yet available for commercial use it is encouraging to see this prototype finally on display. The innovation is part of the brands many eco-friendly efforts, after it made news in 2008 with the development of DSSC with 10 percent energy conversion efficiency.
Via – [Greenlaunches]