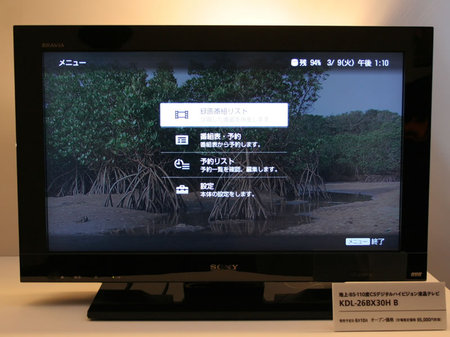 Now here’s something that we can use. Sony, at least their Japanese division, has just launched their Bravia LCD TV model that features a 500 Gig hard drive… built in! Part of their BX series that are available in 32-inch and 22-inch models, this model the BX30H is going to be available in a White color as well.The same model that’s available in other countries come sans the built in memory. Some of the features that the Japanese BX models are loaded with include – CCFL backlighting, 5.1ch audio output with Sony’s SteadySound that helps balance out audio levels, Sony’s BRAVIA Engine 3 digital processor and 720p HD resolution. There’s even an indicator that show users how much of disk space is currently in use and how much is free. Could this be the new trend then? From 3D to onboard storage, what will they think of next.