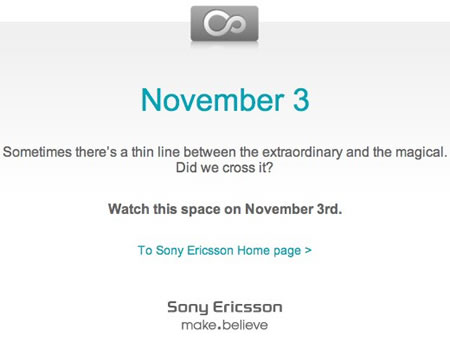 Sony Ericsson may announce their first Android offering, and that too by November 3rd. Known more popularly as ‘Rachel’, among the one’s who made it, the Sony Ericsson XPERIA X10 will come packed with an 8 megapixel camera, HSPA, a touchscreen display and Qualcomm’s 1GHz Snapdragon processor. We can also see a new symbol (something that looks like an infinity mark) on the teaser page. Maybe it’s got something to do with SEs interface, that’s planned for this phone.

There isn’t much to think that this one’s for real. However, like all the speculation we have to combat in our blogs, we make it sound pretty. So let’s see if our trust is broken on November 3rd.
[Slashgear]