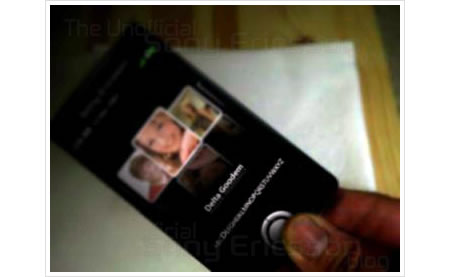 The spy-shot of the new Sony phone christened P5i is doing the rounds. Despite the self-concocted rumors by Sony fans, a few nuggets of info have managed to surface that could be plausible. According to a visitor in the Esato forum who claims to be “beta-tester” of the Sony Ericsson P5i, the P5i is a slider that operates on the Symbian 9.1 system, covered with UIQ 3.2 or even UIQ4. The device should have a 2.8-inch display with VGA resolution (640 x 480). The phone even features a GPS receiver and WiFi b/g support. Some rumors suggest that the phone has a 5-megapixel camera, something that would normally only be placed in Sony Ericsson Cybershot devices. Other imply that the phone will have a 360 Mhz processor and offer a 160 MB internal memory that can be expanded with MemoryStick Micro (M2) and MicroSD memory cards.

For all you know this above picture could be a Photoshop of the Sony Ericsson P5i. We can expect some kind of an announcement or clarification at the Mobile World Congress, which will be held at the beginning of February 2008.
Source