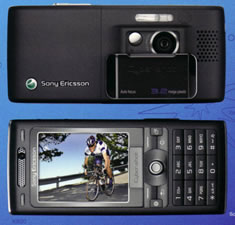 After the phenomenal success of Walkman branded phones is Sony planning to launch Cyber shot branded phones with the K800 ? The K800 will be a successor to the K750i 3G canbybar phone will come with a 3.2 Megapixel Camera with Flash, 16X digital zoom, red-eye reduction, and image stabilizer. You can view the images on the bright 2 inch color screen with QVGA resolution. It has 64 MB of onboard memory which can be further expanded via Memory Stick M2 slot. The K800 will connect via USB 2.0 and comes with a FM tuner. The phone measures 106 x 47 x 18mm and the weight is 115g

Details of the Sony Ericsson K800 have appeared on a German discussion board and Sony Ericsson has made no announcements yet.
Via