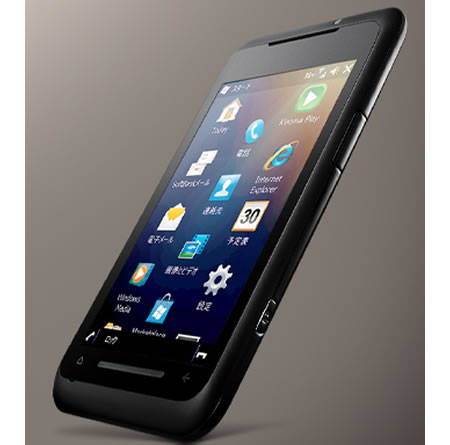 Japan’s Softbank has just announced that Toshiba’s Dynapocket X02T, which is their version the TG01 that features a large 4.1-inch display sporting an 800 x 480 pixel resolution, and features an iPhone like multi page UI, is now part of their handset line up. It’s not the first handset to come with a super large screen and customized UI though as handsets like HTC’s HD2 also feature the same resolution with a larger 4.3-inch display. Like the HD2, the X02T also runs on a Windows Mobile 6.5 Professional OS and it’s also equipped with a 1GHz CPU. Bluetooth 2.0 with file sharing and A2DP, a 3.2MP camera, GPS coupled with A-GPS for additional support, Wi-Fi and microSD card support are also in its feature list.

The Toshiba TG01 has been upgraded to Windows Mobile 6.5 Professional loaded with a It’s still just a Windows Mobile handset with a couple tweaks for version 6.5. On the plus side it looks like an iPhone that went on a diet (9.9mm thick) but at the end of the day it’s still the Toshiba’s TG01 slapped with a funkier name and handed over to Softbank for distribution to their user base. There’s no pricing on it yet.
[Dvice]