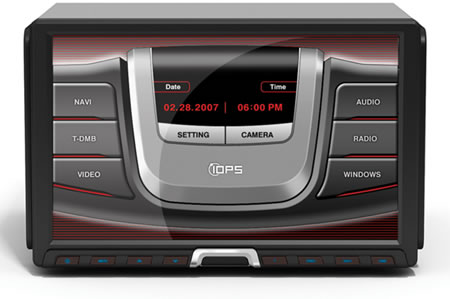 SNT Korea will unveil the IOPS in car PC at the Cebit trade fair which starts on March 15. Powered by Windows XP the touchscreen PC is equipped with GPS for navigation. It supports T-DMB for viewing Live TV on the move which can be later recorded on the onboard hard drive for later viewing or you can burn it on a disc. You are constantly connected to the Internet via HSDPA which provides broadband like download speeds, hook up a Bluetooth Keyboard / Mouse and your mobile office is ready. More details like Processor, Memory, Hard drive etc are not known yet, however they will be unveiled this week at Cebit.
(One more pic after the jump)