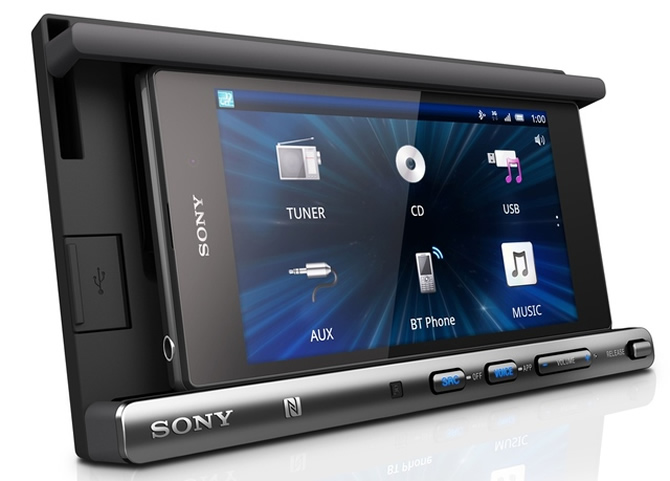 Every year at Consumer Electronics Show a plethora of great products are shown off and launched by companies from around the world and the mad rush makes some of the cool products go unnoticed. One such product which was introduced at this year’s CES was a double-din music player for car by Sony. But it’s no ordinary double-din music player and rather something unique. Over the years we have seen a couple of car entertainment systems which act as a cradle for tablets, but the Sony XSP-N1BT automotive stereo head unit is the first proper double-din system which can slot a smartphone and use its touchscreen as controls for the player.

The stereo unit pairs with the smartphone via Bluetooth and can charge Xperia Z and Z1 with the help of side-mounted magnetic charging port. Non-Xperia devices can be charged using the external USB port on the head unit, which delivers up to 1.5 amps of charging power. Sony’s control app gives the user control over different features through a fairly intuitive UI and has apps including YouTube and other streaming apps. The rest of the controls of the system are placed at the lower end and it even has an external microphone. The XSP-N1BT will go on sale in May this year for $250.