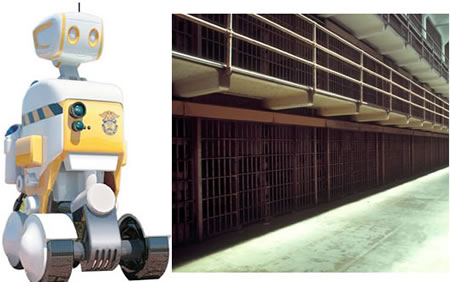 Robot guards will patrol jail corridors in South Korea as early as next year, lifting the burden off human prison guards. Asian Forum for Corrections Chairman Lee Baik-chul said the robots will perform simple tasks such as patrolling during night hours and this will significantly help human prison guards focus on other more complex tasks. At night the robots will watch for any signs of suicide attempts or physical attacks on prisoners instead of the human guards. This will allow the human guards to work on more difficult problems such as educational work and counseling. When the robot sees something unusual, it will report to the central control facility which will then take action. The robots have a speaker and microphone installed on their bodies so that when a prisoner speaks, the guard at the central tower can respond and vice versa. The robots will be able to observe their surroundings through visual software installed in their face.

The Electronics and Telecommunications Research Institute and SMEC will initially develop three robots. The robot will be able to speak a few sentences. It will be about 150 centimeters tall and weigh between 70 to 80 kilograms. The production of the techno-guards will be completed by next March and three sample robots will be sent to a prison in Pohang for a one-month trial. When the trial period is over, the Ministry of Justice will decide whether to adopt these robots for use in other prisons.