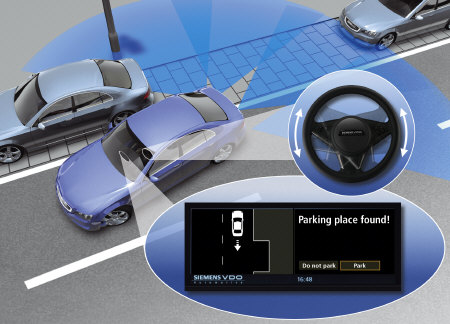 What is a bigger problem than finding a parking space, squezzing your car in that tiny space without leaving your paint on the other car. This may seem straight from a Sci-Fi movie but a technology being developed by Siemens VDO called “Park Mate” not only finds you parking space, but automatically parks your car too. Sensors automatically measure a row of parked cars and alert the driver when there is space large enough for your car. Then a chime is played asking the driver to stop and then the Park Mate takes control over the car. It steers the car itself into the small gap and parks.

The Siemens VDO Park Mate is yet not perfected and will be available from 2008.
Via – Rawfeed