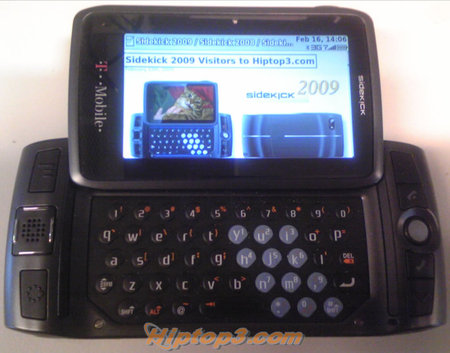 Sidekick LX 2009 is rumored to be rechristened as Blade

Rumors circulating the web state the latest device has a slimmed down profile and is more an evolution rather than a re-invention of the popular device. Sidekick LX 2009 as we are now learning will be launched later this year as the Sidekick Blade. The Sidekick Blade (which may still retain its LX moniker in some form) will get loaded with a nice 3.2 megapixel camera, a large 3.2-inch WVGA display, and microSD memory card expansion slot. There’s also that large QWERTY keyboard, 3G connectivity, and GPS location-based services. The preloaded software points you toward Facebook, Twitter, MySpace, and YouTube. There’s also a blog publishing client and a Photobucket management suite. Underlying all of this will be an open source operating system called NetBSD, coming by way of Danger. The QWERTY keyboard has been given a new look with flatter keys to make it more robust and to fit in with the slimmer design.

The T-Mobile Sidekick 2009 is expected to have a fairly reasonable spec behind it. The 3.2-inch screen should support 854 x 480 pixels and being a 3G enabled device we’re expecting some pretty mean web browser with this device, as well as all the standard social networking stuff. All we can now do is just wait and watch as the device progresses through various internet leaks.
[BoyGeniusReport]