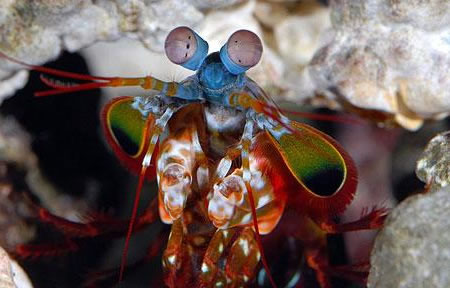 Shrimp Eyes may lead to the development of new DVD players

We may soon be seeing technology get its inspiration from mantis shrimps that are found Great Barrier Reef in Australia. It’s said that their vision system is the most complex one around. They can view 12 colors, that’s four times as much as men can. The light sensitive cells in the eyes of these shrimps work in a similar fashion like the electronic sensors in DVD players. The part where shrimps better DVD players is that they can convert light into other forms of storable information using the whole spectrum of light, whereas DVD players don’t use the entire spectral band. These findings were studied at the University of Bristol’s School of Biological Sciences in collaboration with the University of Maryland.

Dr. Nicholas Roberts, who’s the lead author of Nature Photonics said, “It really is exceptional – out-performing anything we humans have so far been able to create.” Thank the shrimp!
[Telegraph]