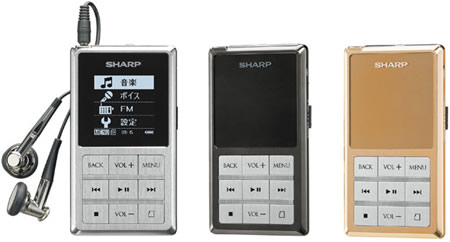 Sharp Japan has announced the MP-E200 / E300 MP3 players which are an upgrade to the B-200 and 300 announced in May this year. Except for the onboard memory 512MB and 1GB both the models share the same features. The players support MP3, AAC, WMA and WMA DRM10 formats. Memory can be further expanded via Mini SD card slot, the players include a FM radio, transmitter and also supports recording via FM, Line in and built in microphone. It connects to the host via USB 2.0 and is compatible with Windows only. The Lithium Polymer has enough juice for 24 hours of continuous MP3 playback and 14 hours of WMA.