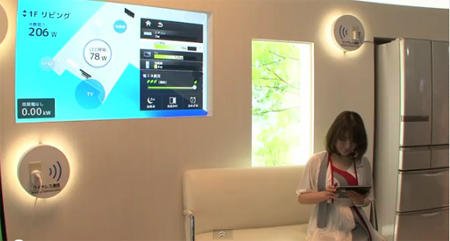 The future’s in course for an inadvertent peril and we are aware of it and take measures to avert such calamities. But how do we gauge our efforts in doing so? This is where something like Sharp’s future-ready Home Energy Visualization System, that’s in the works at the moment. It extends control of each device to a smartphone or a tablet. With a Wi-Fi model in tow, we will soon have a life demonstration of a probable prototype. The version that will eventually hit shelves will have five units and a router as a complete set. Up to 30 services can be simultaneously configured as per this model. Do watch the video after the jump for a better understanding of the same.

The company was stated, “As you can see on the wall, there’s a white box plugged into the socket, which measures power consumption. For example, over there, the TV’s power consumption is being measured, and the measured data is sent by wireless connection to this tablet, so you can see how many watts the TV is using. This is the system we’ve developed, and we’re now working on a commercial version.”
“This demonstration includes not just visualization, but also control. For example, if you select “LED” like this, you can adjust the tone and brightness of the LED lighting. At the same time you can also check on the tablet how the adjustment changes the power consumption.”
Dig Info