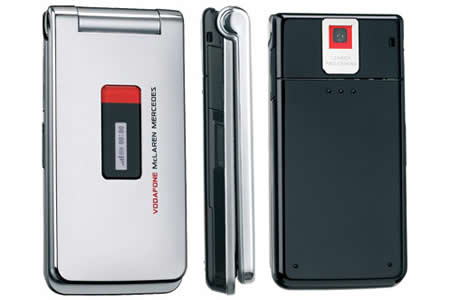 As Title Sponsor and Official Mobile Partner of the ‘Vodafone McLaren Mercedes’ team, Vodafone is raising its association with Formula 1 to the ultimate level. Vodafone has committed to a long-term agreement, commencing 1st January 2007. There are clear synergies between the attitudes and values of Vodafone and the McLaren Mercedes team and this successful partnership has resulted in the Sharp 770SH ML special McLaren-edition. It sports the McLaren colors of red, silver and black, and the front is imprinted with “Vodafone McLaren Mercedes”. It also boasts a central LCD on the lid, 320 x 240 inner screen, 1.3-megapixel camera, Bluetooth, a paltry 5MB of internal memory, miniSD slot, MP3 playback, Vodafone Live compatibility, USB connectivity, and 220 minutes of reported talk time.

At 17.1mm thick it’s not going to give ultra-skinny fashion phones any sleepless nights. Sharp’s Mercedes McLaren-branded 770SH is expected to retail at $91 in about two weeks.
Via – Luxurylaunches