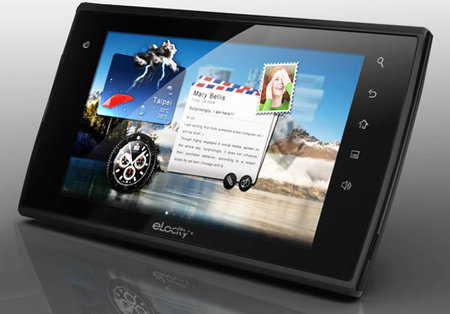 One shouldn’t underestimate the capabilities of any small manufacturers out there today. In the lead up to CES 2011, Stream TV-owned eLocity is already in the news for going against Google’s wishes and outing Android 3.0 (Honeycomb). eLocity, a relatively new tableteer, who had launched their tablet eLocity E7 earlier in the year, promises to launch several new devices this year, including seven different tablets – all of which will be revealed at CES – each belonging to the company’s new A10 line (called the A10.1 through A10.7). Each A10 slate will run the Flash-enabled Android 3.0 (Honeycomb) OS with NVIDIA Tegra 2 processors, microSDHC support (up to 32GB), USB ports and 1080p video output via HDMI.

eLocity’s A10 tablets launch follows the successful introduction of the eLocity A7 seven inch mobile tablet, whose production targets were increased to meet high consumer demand. Clearly, a force to reckon with?
[BoyGeniusReport]