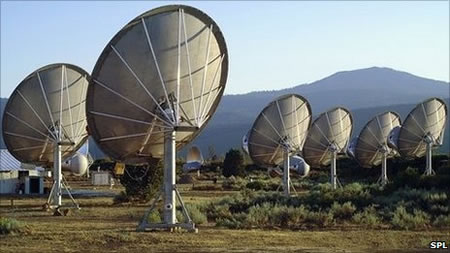 Looks like there might be no home-coming for E.T. after all! The popular pop culture alien figure is facing the tough reality of ‘lack of funding’, as plans to scrap a $50 million alien telescope array is being mothballed. This is heart-wrenching for many who’ve spent decades in search of extraterrestrial life. The Search for ExtraTerrestrial Intelligence (SETI) is a project that’s been underway to bring light to the not-so-inconsiderable question of whether humans are truly alone in the universe. The original plans called for the Allen Telescope Array, part of the Hat Creek Radio Observatory, to house as many as 350 dishes. However, budgetary constraints forced the SETI to shut the first 42 telescopes which were installed in 2007 to scan the skies for evidence of alien life, with no indication yet of returning to operations.

The satellite array, which is currently located about 300 miles north-east of San Francisco, is a partnership between the SETI Institute and the Radio Astronomy Lab of the University of California, Berkeley.
[CBS News]