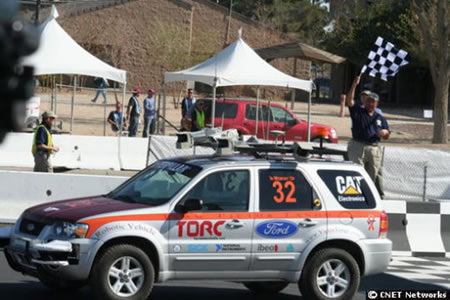 Your typical day is stressed enough at work to face the everyday issue of parking in and around the office. Imagine going to work and telling your car to go park itself while u head to the lobby, or better yet go back home and be useful for the wife and kids. Then comeback and pick you up at the end of the day. Sounds corny? Not anymore, self driving cars are closer to reality that you may think. The third runner up for Urban Grand Challenge setup by DARPA, ByWire XGV a self driving Ford Escape hybrid and it has now been announced for sale by its winning team Torc Technologies. Infiniti has a new car that features “lane departure control,” which is capable of keeping itself between lane lines. It will use the brakes to kick itself back on course if it veers from a lane. Like most concept vehicles there are some being used by the military for mine hunting. Torc has demonstrated how the technology works with the iRobot PackBot, an unmanned ground system used in Iraq for defusing explosive devices. Soldiers typically control the PackBot with a remote. But with Torc’s system, called Autononav, they can use a monocular to mark a target for the robot to reach 100 meters away, for example; and the robot will drive itself there. Those are of course sold only under military contracts, so for the rest of us a self driving Ford Hybrid isn’t a bad option.

The car will sell for about $60,000, excluding the cost of the Ford Escape Hybrid with four-wheel drive. The starting sticker price on the SUV with 4WD is about $29,000. I wonder, how will the cops give a ticket if the car is caught speeding as it misses a deadline to pick you from work.
Source