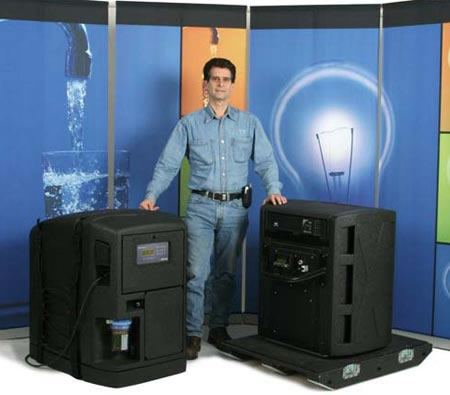 The United Nations celebrates an Earth Day each year on the March equinox, a tradition which was founded by peace activist John McConnell in 1969. A second Earth Day, which was founded by U.S. politician Gaylord Nelson as an environmental teach-in in the late 1960s, is celebrated in many countries each year on April 22. But I’m not here to lecture you about the event; I’m here to tell you about this cool new invention by Dean Kamen. Many of us know Dean Kamen as the inventor of Segway, and this time around he has invented created a new water regenerator called the Slingshot. Since the device has no filters, it works via vapor condensation distillation and runs on cow dung. Ant source (yes ANY) of liquid can be converted to pure healthy water with this invention and it generates enough electricity to power 70 energy-efficient bulbs.

Kamen estimates the units will cost $1,000 to $2,000 and wants to get these into mass production ASAP so that it can be shipped to the clean-water deprived regions of our earth. Check out this video, its awesome.
Source