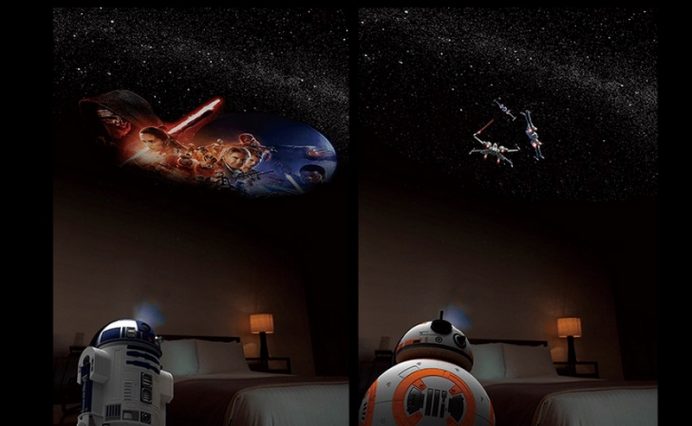 Sega Toys has added two new models to its home planetariums that are shaped in the form of Star Wars characters. The company’s first Star Wars home planetarium came out in 2011 that was based on the R2-D2. The first of the two newly resealed models is based on the spherical droid character BB-8 from the Star Wars franchise that made its first appearance in the 2015 film Star Wars: The Force Awakens. The second model is a new iteration of the R2-D2 Homestar planetarium of Sega Toys and both the models will go on sale starting 27th July with a sticker price of 6,980 Yen ($61 approximately).

The main body size is 107 × 168 mm (diameter × height) for the BB – 8 model and 120 × 86 × 175 mm (width × depth × height) for the R2 – D 2 type. Both the models have common functions and similar features. The projectors on the home planetarium can project approximately 10,000 stars on the ceiling and 4 types of scenes that include “Millennium Falcon” and “Star Destroyer” on the BB-8 model and “Front of Star Jaguar” and “X – WING” on the R2-D2 variant. The heads can rotate 360 degree and come with a mechanism that can adjust the projection range and the focus according to the size of the room. The Homestar projectors use three AAA alkaline batteries to operate and have a continuous usable time of 4 hours.