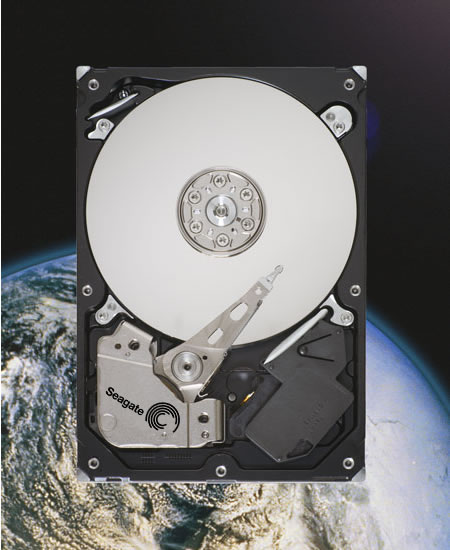 Seagate aims at the “industry’s first 1.5-terabyte desktop and half-terabyte notebook hard drives.” PMR is “capable of delivering more than triple the storage density of traditional longitudinal recording.” The company says that it is able to greatly increase the areal density of its drive substrates by utilizing perpendicular magnetic recording (PMR) technology. The desktop-class hard drive, Barracuda 7200.11, will be out in a 1.5TB capacity. Specs show that the 3.5-inch drive is made up of four 375GB platters and has a 7,200-rpm rotational speed. It has a 3Gb/second SATA interface, or 1.5Gb/second using Native Command Queuing (NCQ). Apparently the new 1.5TB drive supports a sustained data rate of up to 120MB/second. Many of the existing drives in the 7200.11 series have both 16MB and 32MB cache versions, the 1.5TB will likely only be available with a 32MB cache.

Seagate is also outing two new 500GB notebook hard drives, the Momentus 5400.6 and Momentus 7200.4. The 5400.6 spins at 5,400-rpm, and it includes a 8MB cache. The 7200.4 spins at 7,200-rpm and has a 16MB cache. Both drives use 3Gb/second SATA interfaces. Both drives are supposed to be reasonably vibration-resistant and are low on power consumption:
Both of Seagate’s 2.5-inch, Momentus drives will start shipping in the fourth quarter of this year, and pricing has not be set yet.
The Barracuda 7200.11 will be out in August. Pricing has not yet been announced.
Via –
Source