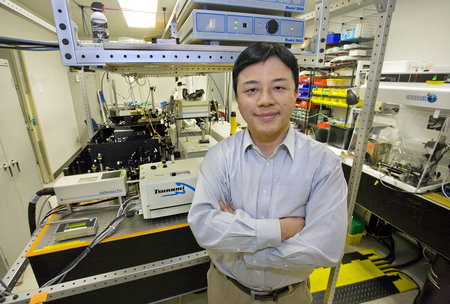 It would be a blatant lie if you said that you never wanted to become invisible. No matter how old you are, you’d always want to be invisible some time though the reasons would differ as you’d grow up (pun intended.) Here is something that could make it true. Scientists have come up with an invisibility cloak which can hide things from human sight. It is not that the world hasn’t seen any of this before, but Xiang Zhang and colleagues claim that those are still in their infancy stage. As against those, theirs is a reflective carpet cloak out of layers of silicon oxide and silicon nitride etched in a special pattern. It works by concealing an object under the layers, and bending light waves away from the bump that the object makes, thus making the cloak look flat and smooth like a normal mirror.

During the resting phase, the device cloaked a microscopic object, something as small as a red blood cell, but the scientists are pretty optimistic cloaking any object underneath a reflective carpet layer. Umm, it looks a little raw at the moment but we’d be waiting eagerly for more developments on this one.
[Xenophilius]