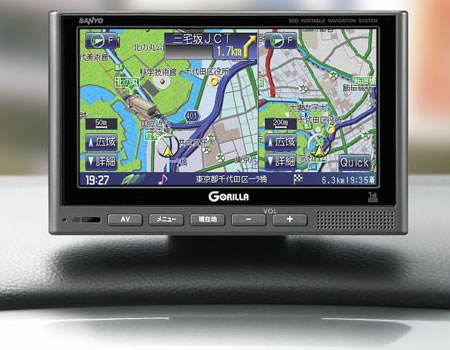 Sanyo Japan has announced a new GPS the NV-SD585DT which comes with a 5.8 inch touchscreen supporting a resolution of 480×240 pixels. The unit comes with a 4GB SSD drive which is preloaded with navigation data. Unlike the GPS units we use this baby has two antennas one for standard GPS and the other catching the One-Seg transmissions so you can watch Digital TV in your car. The 4 GB SSD drive doubles as a DVR as you can record your favorite programs and with support for EPG you can program the GPS to do so. Also included is a FM transmitter and SD card slot for loading up MP3 / WMA songs. The GPS is powered by 400 Mhz CPU and Gorilla engine which enhances the 3D graphics for smooth navigation.