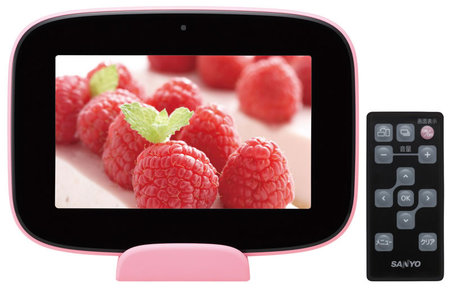 Sanyo Japan has announced the HNV-S70 a 7 inch digital photo frame which supports a resolution of 800×480 pixels, viewing angle of 120 degrees and playback of audio / video along with JPEG files. It has 500 mb of internal memory which can be further expanded via SD card / Memory stick slot. Unlike other digital frames this one lacks Wi-Fi connectivity but does support Infrared connectivity for transferring photos from mobile phones. The frame will go on sale in Japan from October 8 for 15,000 Yen ($ 165).
[Sanyo Japan]