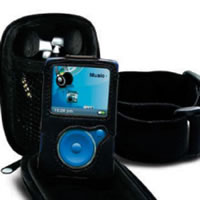 A very vigilant geek was able to spot a device named “Fuze” on the new Sansa updater a few weeks ago. After a bit of prodding he was able to figure out that a Sansa Fuze accessory bundle was there on google so maybe a Fuze is in the works. Although nothing is certain, it is believed that Fuze might fill the gap in SanDisk’s new product line between the Sansa Clip and the Sansa View. Apparently Fuze matches the sizing of the 3rd gen Nano plus speculations indicate up to 8-16GB memory, video playback and radio.
Awaiting official conformation.
Source