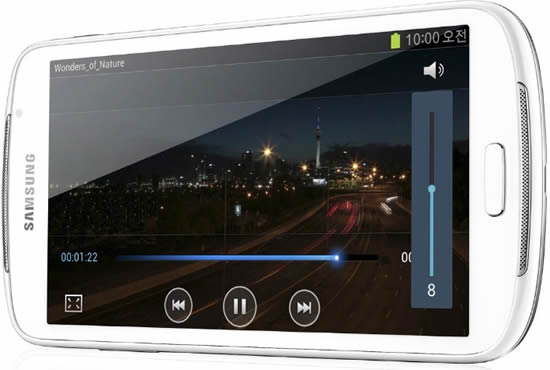 Samsung managed to close in the gap between tablets and smartphones with the Galaxy Note. Now, the South Korean manufacturer has launched yet another large-screen media device to fill in the void between the Galaxy Note and tablets! Called the Galaxy Player 5.8, this supersized portable media player sports a large 5.8-inch, 960 x 540 LCD, enabling you to watch videos on the go. By design, this one’s more or less a beefed-up Samsung Galaxy S III. Running Android 4.0 and TouchWiz, a first in Samsung media devices, the Galaxy Player comes with up to 32GB of built-in storage space and a microSD slot with a 2,500mAh battery to top it all. A media player you’d probably require to wear Hip Hop-esque baggy jeans for, the Samsung Galaxy Player is an ideal way to stay entertained on the go. Also, there has been no mention in regards to the processor’s specifications or the pricing and release date of this one yet. Stay tuned for more.