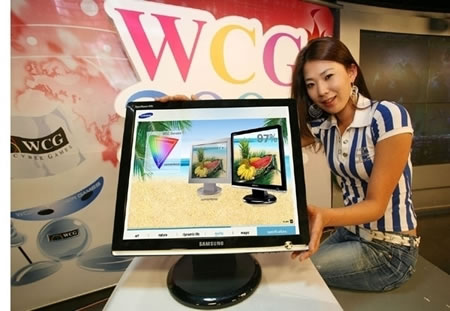 Samsung Korea has unveiled the SyncMaster CX930B which features 97% color reproduction the highest in the industry, compared to 87% of tradational monitors. Thus it can display colors like emerald green and deep red color which the existing monitors are unable to display. The 19″ LCD has a contrast ratio of 2000:1 and a superfast response time of only 2ms. It has the print view function which allows you to preview colors on the monitor of what would be printed on the paper by communicating with the printer. Thus eliminating the need to print several times and check if the colors are correctly printed or not. The Samsung SyncMaster CX930B will be official display at the upcoming WCG (World Cyber Game) 2006.