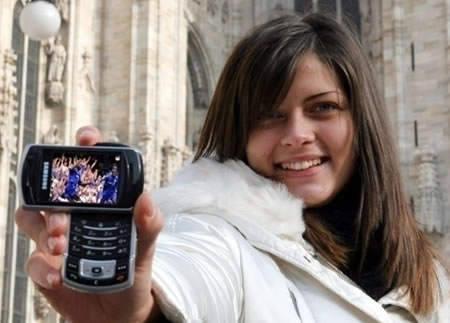 Samsung has launched a new TV phone in Italy the SGH-P930 in association with Telecom Italia. The new phone includes HSDPA technology for high speed data transmission. The phone has a 2.3 inch LCD (240 x 320) which supports PIP (Picture in Picture) so you can view two channels simultaneously, which is practically useless keeping in mind the tiny 2.3 inch screen. The display can be twisted to a horizontal for a better TV viewing experience which is amplified by the stereo speaker. The SGH-P930 has a 2 Megapixel camera and a VGA res camera for video conferencing. A micro SD card provdies memory expansion however it does not support TV recording like its advanced Japanese counterpart the Sharp 911SH.

Analysts are betting MobileTV as the next big thing and is lead in three different standards DVB-H in Europe, MediaFLO in the U.S, and DMB in Korea.